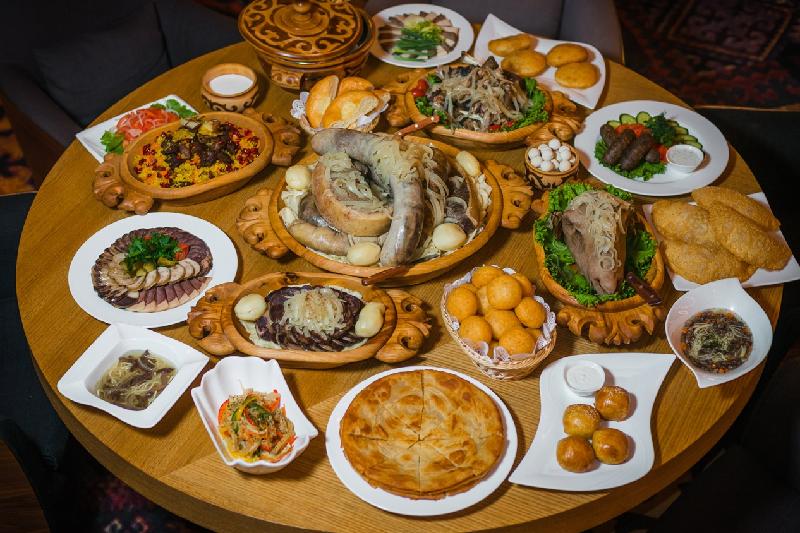 What to eat in Kazakhstan?

Such a delicious Kazakhstan!

Kazakhstan is not only beautiful landscapes, high mountains, green forests and endless steppes. Kazakhstan is a mixture of many cultures and various civilizations, which naturally affected the local cuisine. The cuisine in Kazakhstan always leaves the guests of this country with only the best impressions, as it is saturated not only with many tastes, but also with hospitality and warmth when serving.

Kazakhstan has always been the center where the culture of the Middle East, Asia, Central Asia, the Caucasus and European culture was mixed, which had a huge impact on the natural and the cuisine. In Kazakh cuisine, all the best from the cuisines of the countries that have given their zest is concentrated. And this is a wonderful aroma of spices, freshness of products and of course the most important feature is the taste of fresh meat, since it is no secret that the basis of Kazakh dishes is meat.

We will introduce you to several main and most delicious dishes.

Manti - is one of the most favorite dishes of the inhabitants of Central Asia, East Turkestan, China, and most of the inhabitants of the East. Manti are also becoming more and more popular in Russia and in Europe. Any guest who tastes manti expresses admiration for the taste and aroma of this dish. The basis of the recipe is a thinly rolled dough with chopped filling inside. It can be lamb, beef or horse meat, diluted with sheep’s tail fat and vegetables. As a rule, they use onions, potatoes, cabbage, pumpkin or jusai, but in general, who will decide what. Manti is steamed in a special manavark and served with tomato or pepper sauce, also greased with sour cream or butter. 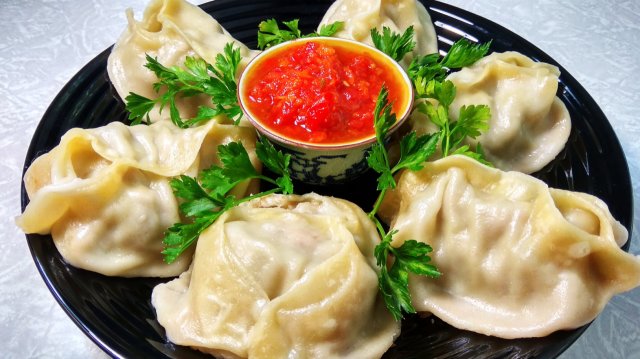 Kuyrdak - is no less tasty and no less appetizing dish than manti. Kuyrdak is based on meat, although Kuyrdak is cooked differently in different regions. In the northern regions of the country, for example, kuyrdak is pieces of chopped liver, kidney, heart and meat fried in a cauldron with the addition of potatoes in them, while in the southern regions of Kazakhstan this is fried with large pieces of meat and potatoes already added less. Sheep meat is taken as a basis. 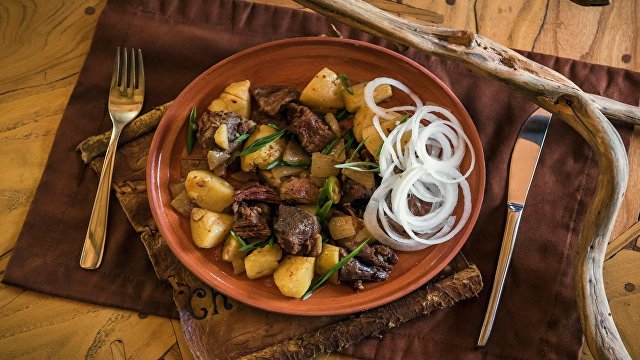 Lagman - is a truly ambiguous dish. Different peoples of Kazakhstan prepare it in different ways. This can be finely chopped noodles fried in a burning pan with the addition of tomato and vegetables and coarsely stretched noodles with vegetable frying without broth, and lagman in the form of soup with a lot of aromatic broth, but the main base is hand noodles made from very flexible dough. Special connoisseurs of the lagman say that the thinner the noodles are extended, the more decent and skillful the bride cooked it. So there are recommendations for men. If you are looking for a beautiful bride in our beautiful country, watch her pulling noodles for a lagmanJ. 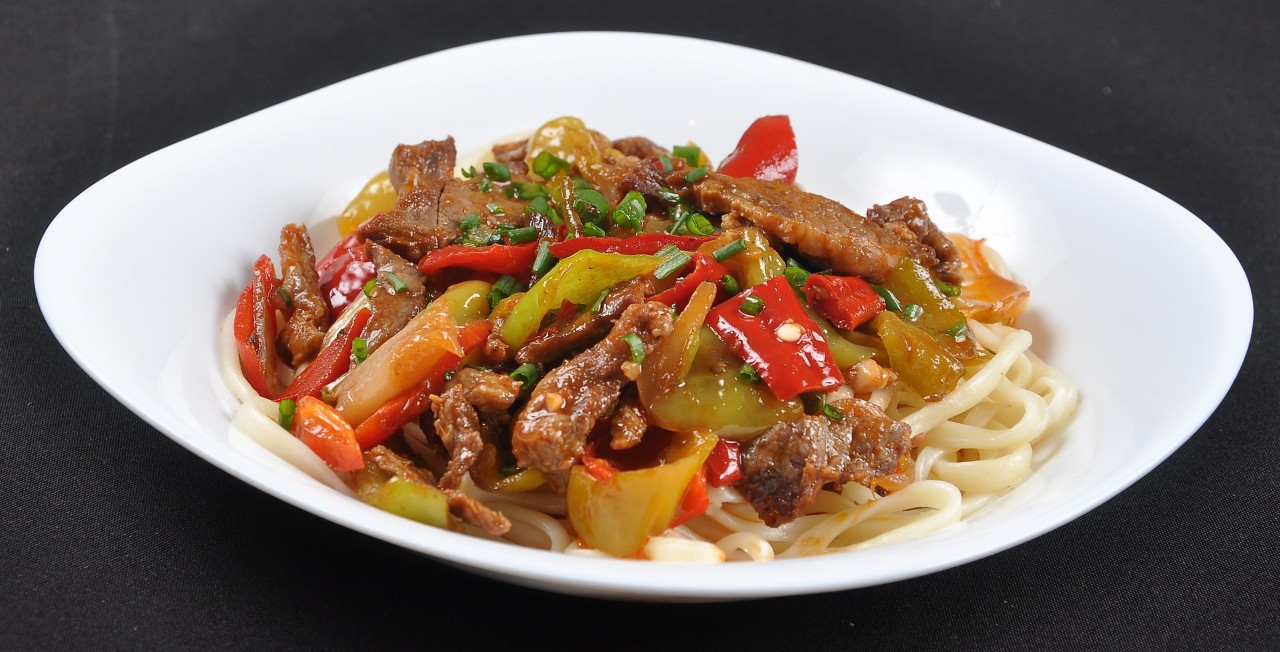 Beshbarmak - of course, is the khan of Kazakh cuisine, in the direct translation it means “five fingers”, since before it was eaten with hands. It is served, as a rule, to the most expensive and honored guests. It is a thinly rolled dough cooked in broth, with large pieces of meat laid on top. They use lamb, beef, but the most iconic and honorable is beshbarmak with horsemeat. It is served not only with meat, but also with chopped horse sausage, cooked by hand, as well as other delicious meat products. 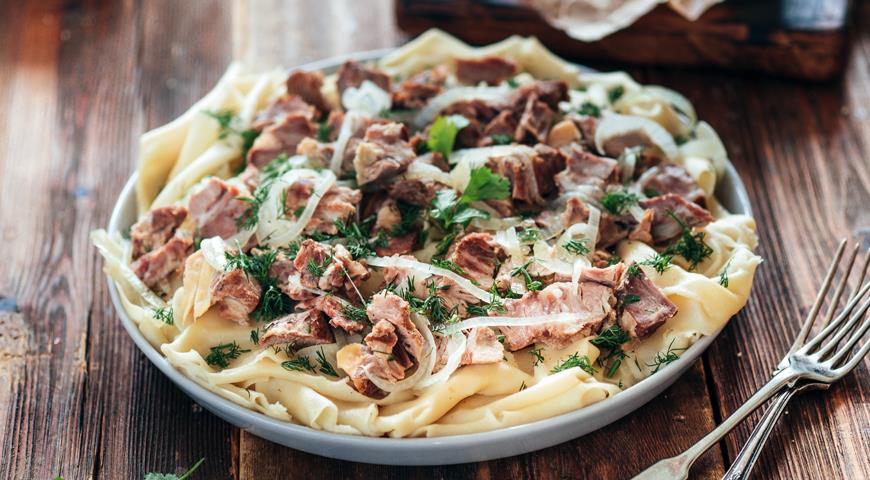 Kazy - is a delicious sausage made from horse meat from the ribs. Traditionally, the ribs are pushed into the intestine completely with meat, previously coated in spices. In no case can meat for kazy be chopped or minced, but only completely and whole. Kazi can be boiled, smoked or wilted. It is a completely clean and healthy product. Dietary scientists have proved the benefits of horse meat, as horse meat is cholesterol-free and the structure is protein. 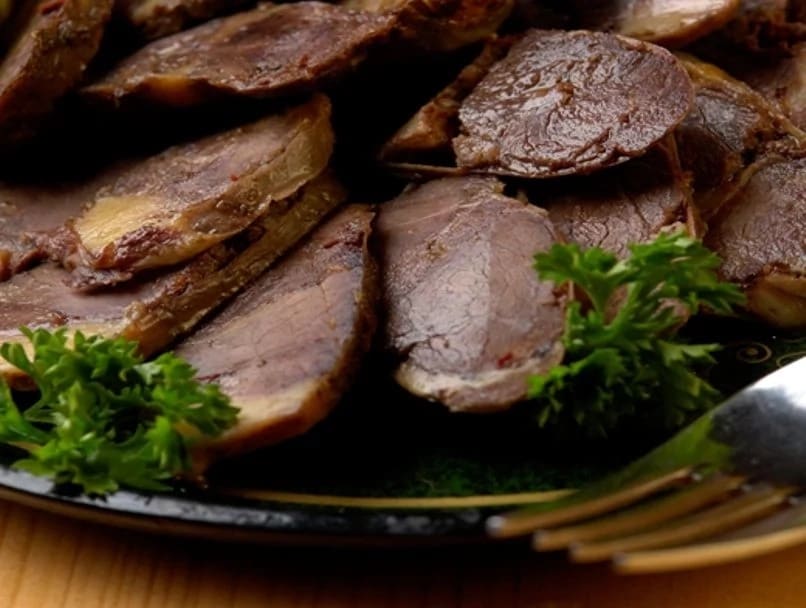 Sorpa - is a traditional Kazakh dish, based on a lamb or horsemeat broth. In ancient times, sorpa was served as a drink for the main dish beshbarmak. Today, there are many variations, with the addition of vegetables such as sweet peppers or potatoes. For the most delicious use, it is recommended to add finely chopped onion and kurt to the sorpa. 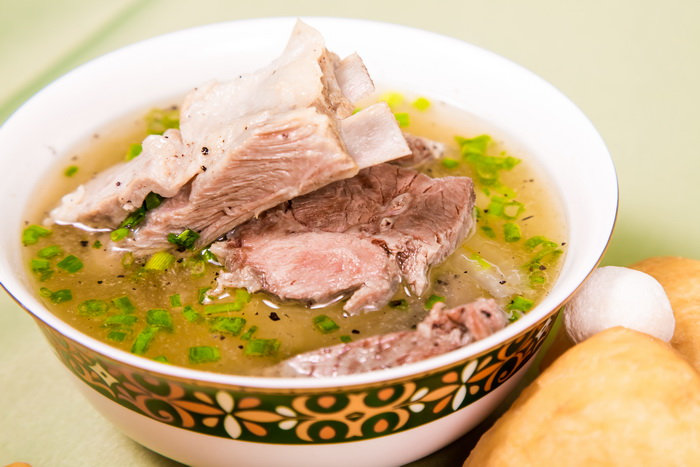 Kurt - is more of an appetizer than a main course, but it is so rich in useful properties and nutritious that in the old days during long nomads, Kazakhs ate kurt on the way, which allowed them to maintain strength and be full of energy for a very long time. Regarding the preparation, we can say that this is the hardest cheese in the world. A kurt is prepared from milk by removing moisture, adding salt and drying in the sun and wind. 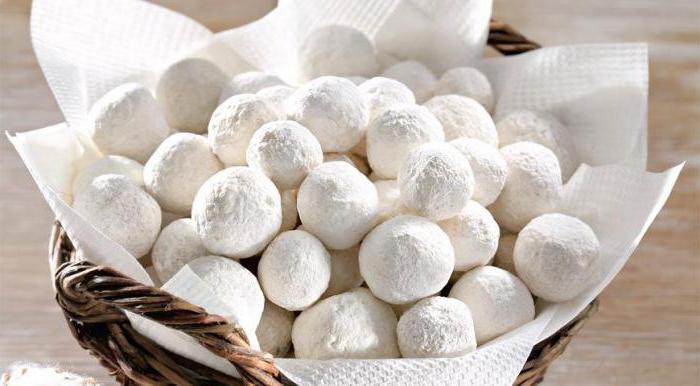 Plov - or as Kazakhs are called in the countryside - kuresh. Pilaf is popular not only in Kazastan, but takes the base in Uzbekistan, where it is considered the main dish and both the beshbarmak from the Kazakhs and the pilaf from the Uzbeks are served to the most dear guests. His recipe at first glance is simple. The meat with onion is fried initially in vegetable oil mixed with lamb fat tail, then carrots are added, well, and after making a juicy zirvak, rice is added. But!!! Not everyone can cook pilaf, since a tasty and proper pilaf has its own secrets and only a man can cook a real pilaf. In Uzbekistan, special people are even specially trained and trained for this. For real pilaf, you need meat fried in oil heated to a certain temperature, and carrots cut with a certain thickness, but most importantly, a variety of rice so that pilaf does not turn into rice porridge. 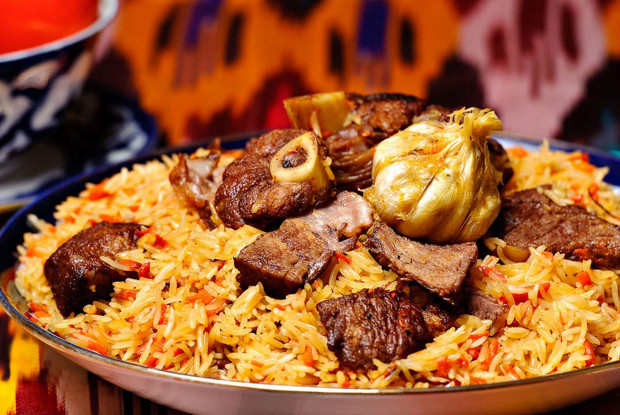 Syrne is probably the dish that the Kazakhs like to cook most, going to the countryside or inviting a lot of guests. The basis is taken the meat of a young lamb, namely fresh and not frozen. For starters, meat is marinated in large pieces in milk or sour cream and the longer, the juicier the dish. After marinating in sunflower or fat tail oil, fry the onions, and then add the meat and set to simmer for 6-7 hours on low heat. In the process of cooking, carrots and garlic are added. After the meat is cooked so much that the pulp leaves the bones, they pull it out and stew the potatoes in the remaining broth. Served with vegetables. 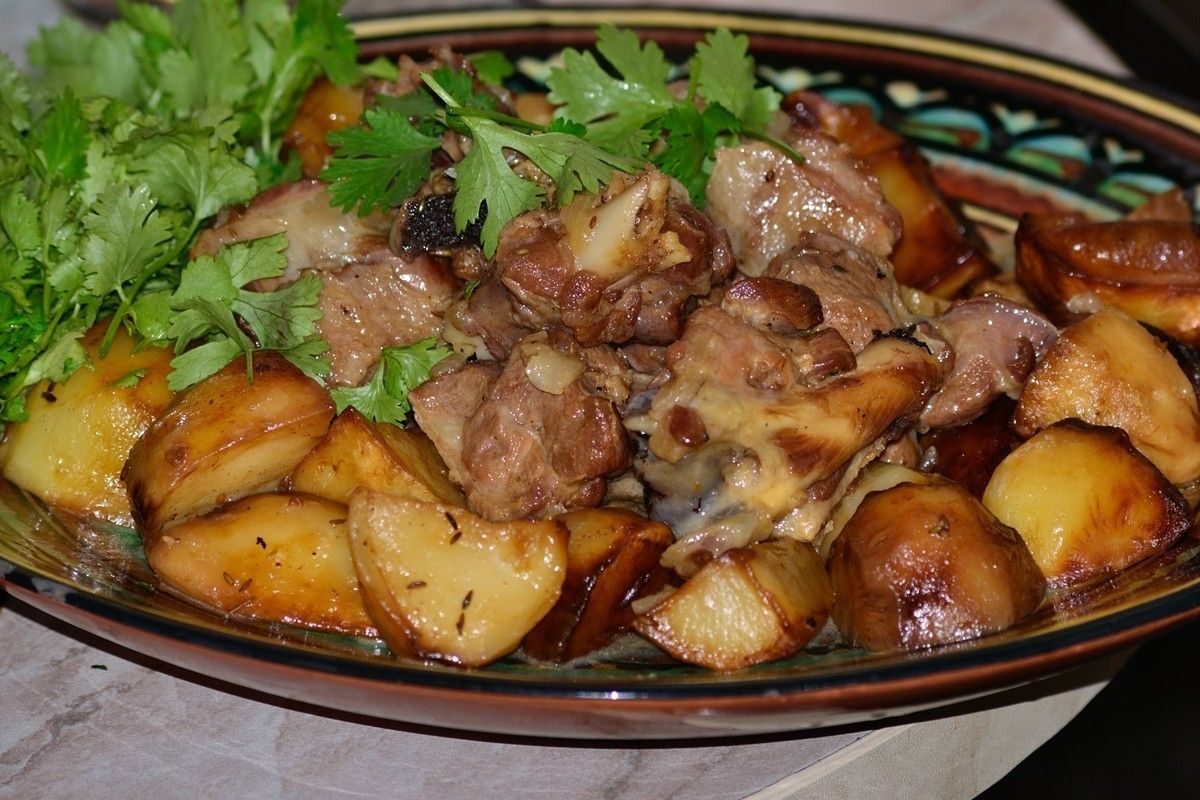 Kumys-mare's milk, oxidized by special beneficial bacteria. Regular use is recommended, as it has great healing properties. It happens that it is oxidized so that it gets the properties of alcohol. In ancient times, nomads instead of wine used precisely the highly oxidized koumiss. The beneficial properties of koumiss were scientifically proven back in the 19th century. It is actively used in the treatment of diseases such as gastritis, typhoid fever, tuberculosis, anemia, neurasthenia, scurvy and much more. 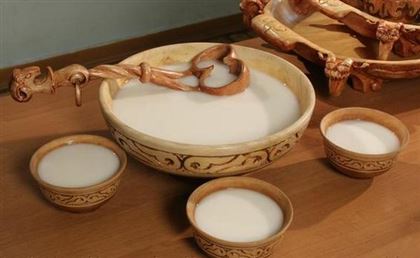 Baursaki-pieces of dough fried in oil. Typically served as an appetizer to the main course. They are cooked in milk or water dough, but each housewife always has her own little secret to cooking this dish. They are most delicious when they are only cooked and the hot ones crunch nicely when bitten. Especially tasty when served with sour cream. this dish cannot be called only Kazakh, since slices of fried meat on skewers are available in the kitchen of almost every kitchen in the world, but each recipe in each country has its own flavor. The culture of cooking barbecue in Kazakhstan was greatly influenced by the peoples of East Turkestan, Uzbekistan and the inhabitants of the Caucasus, resettled in Kazakhstan in the 30s and 40s of the 20th century by Stalin. For traditional barbecue, fresh meat of young lamb is used, as a rule, if the meat is fresh, it does not require a long pickling, it is simply sprinkled with red and black pepper, after which it is soaked for a couple of hours in pre-squeezed onion juice and grilled over charcoal. The result is a fragrant and delicious dish. Served with chopped onion, fried vegetables and a thin tortilla. 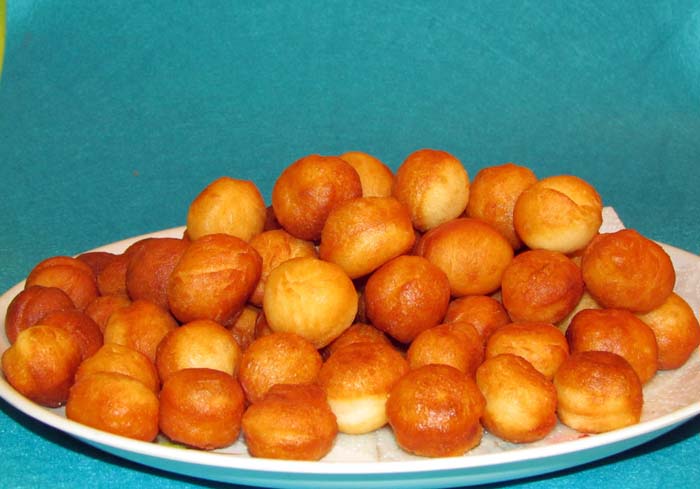 Shish kebab is a dish that cannot be called only Kazakh, since slices of fried meat on skewers are available in the kitchen of almost every kitchen in the world, but each recipe in each country has its own highlight. The culture of cooking barbecue in Kazakhstan was greatly influenced by the peoples of East Turkestan, Uzbekistan and the inhabitants of the Caucasus, resettled in Kazakhstan in the 30s and 40s of the 20th century by Stalin. For traditional barbecue, fresh meat of young lamb is used, as a rule, if the meat is fresh, it does not require a long pickling, it is simply sprinkled with red and black pepper, after which it is soaked for a couple of hours in pre-squeezed onion juice and grilled over charcoal. The result is a fragrant and delicious dish. Served with chopped onion, fried vegetables and a thin tortilla. 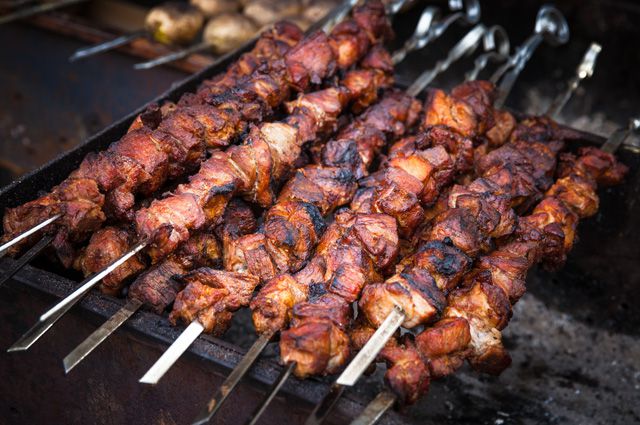