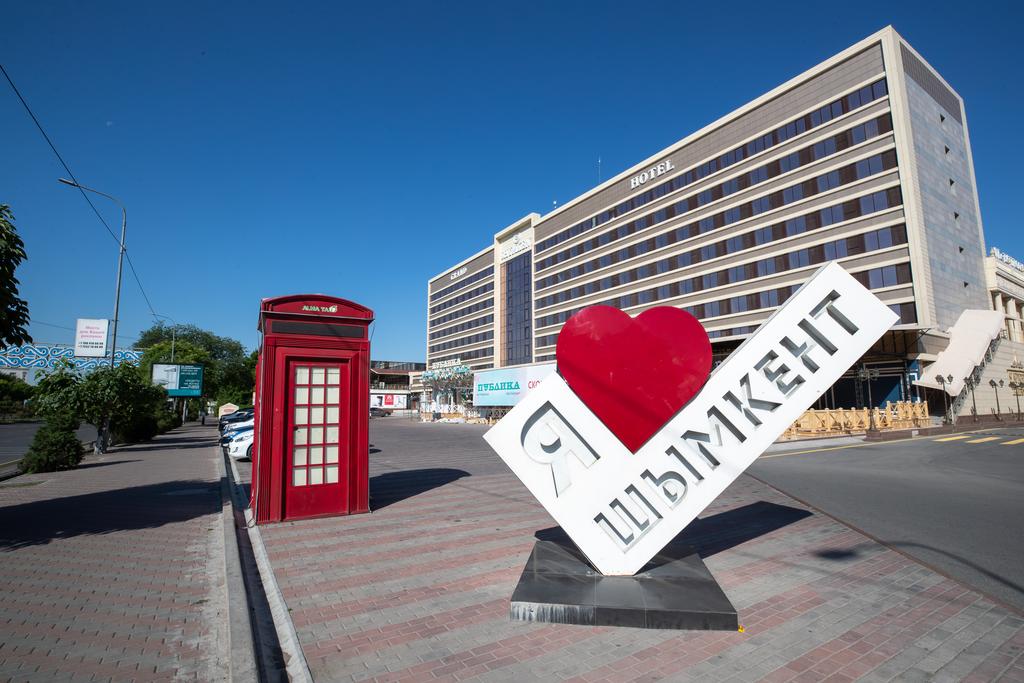 Tours in Shymkent and the South Kazakhstan Province

The warmest and richest in interesting events and legends, the roots of which go deep into history, both in Kazakhstan itself and throughout Central Asia, South Kazakhstan Province (SKP). It was through this area that the Great Silk Road passed.

Thanks to this, in the SKP, such significant cities for history have developed widely: Turkestan, Otrar, Ispidzhab, Sygnak, Suzak and Sauran. And trade is not all that these cities are famous for, they were also cultural and scientific centers that gave our country such a great name as Abu Nasyr Al-Farabi, whose homeland is the city of Otrar.

Nowadays, the most popular and large-scale city of the South Kazakhstan Province is Shymkent. Although it separated from the SKP and since the summer of 2018 is a separate administrative unit, every Kazakhstani, when he thinks about the south of Kazakhstan, first of all thinks about Shymkent.

The largest city in Kazakhstan is Shymkent.

The city is considered the third most important for the Republic and, accordingly, has a republican status. Another important fact about territorial affiliation is its scale, which is the largest in Kazakhstan.

City itself and its region has a great many significant and historical places. Thanks to the work of its residents and worthy courting of significant places, in 2011 Shymkent was recognized as the “Best City among the CIS Countries” by the International Assembly of Capitals and Major Cities.

What to see in Shymkent and in SKP?

As mentioned earlier, the South Kazakhstan Province is rich in tourist places. There are about a dozen parks, more than three museums and theaters, and this is only in the city of Shymkent. There are also a huge number of other historical and sacred sights of the SKP itself, which are rich in their legends and facts, special atmosphere. Among them, you can, and even need to highlight:

One of the oldest cities that were formed on the territory of modern Kazakhstan. The history of the oasis itself begins with the I (first) century AD, from that moment begins the "heyday" of the area, which lasted until the XII (twelfth) century. It is noteworthy that the city was considered inhabited until the beginning of the XIX (nineteenth) century.

Such success was associated not only with the fact that the Great Silk Road passed through it, but also with the fact that, on the whole, the terrain of the Otrar oasis is very favorable for life and development. Largely due to the location of the settlement near the place where the Arys river merged with the Syr Darya river. This allowed the city to grow to a population of two hundred thousand, among which there were a huge number of scientists, artisans, sages, musicians and similar personalities who formed the individual culture of the area. It will not be superfluous to note the developed infrastructure of Otrar, which included everything necessary for a quality life of that time.

According to historical data, in the XIII (thirteenth) century, after the ambassadors of Genghis Khan were executed in the city, Mongol troops besieged the city. As a result, after a grueling six month siege, the city fell. The Mongol invasion took most of the lives of the townspeople who survived - they took it into slavery, burned the city itself and turned it into ruins.

But the story of Otrar did not end there. Later, already in the XV (fifteenth) century, the city was rebuilt. But after the invasion of the Dzungars, New Otrar was plundered and destroyed. And at the beginning of the XIX (nineteenth) century, he was finally abandoned.

Nowadays, since 2004, the program “The Revival of Ancient Otrar” has been carried out, which involves the creation of an archaeological open-air museum.

Arystan Bab has come a long way, during which he mastered 33 religions and opted for Islam. He is considered one of the followers of the Prophet Muhammad. Arystan Bab is one of the most significant personalities in Islam. According to legend, the saint received directly from the prophet a robe and a date with an amanat, on the basis of which he should have passed them to Khoja Ahmed.

The mausoleum of Arystan-Bab is located near Otrar, it was erected over the grave of the saint. The construction was carried out in the period from the XIV-XV (from the fourteenth to the fifteenth) centuries. From the first building there remained carved door pillars of aivan. Later, on the site of an ancient burial place, which was destroyed by an earthquake, a structure was erected that had two domes with an aivan and two carved wooden columns. Later it collapsed, and in 1909 was erected again.

The mausoleum acquired its current (current) form during its one destruction, which was caused by a high level of groundwater, which brought the building into disrepair. In 1971, it was decided to demolish the mosque and rebuild it in a new way.

Now the mausoleum is considered one of the Muslim shrines of Central Asia, in which pilgrimages are constantly performed.

It is located in the city of Turkestan and is a large complex of palaces and temples, is a recognized architectural masterpiece. The mausoleum is also listed as a UNESCO World Heritage Site.

The mausoleum was erected at the place where Khoja Ahmed Yasavi was buried, whose first mentor is Arystan Bab. Khoja Ahmed himself, in turn, was not only a poet, but an authoritative person of the Muslim people. The preacher had an incredible impact on Islam in Central Asia.

The view that the mausoleum has at the moment has arisen thanks to the legendary commander Tamerlan. On his orders, two centuries after the death of Hodge Ahmed, an incredible complex was built on the same spot where the old mausoleum was located. It was a rather wise act that exalted the military leader in the eyes of his subordinates and strengthened the fundamental authority of his personality.

The mausoleum itself includes a huge variety of places that would be interesting to visit. All of its guests are greeted by the legendary giant cauldron. On giving Timur ordered the masters to cast a two-ton copper cauldron, in which food was prepared in memory of St. Khoja Ahmed.

In addition to a cauldron of incredible size, you can visit the mausoleum itself, a mosque, palace halls, a library filled with ancient manuscripts, an economic complex and a lot of other places rich in their stories and incredible atmosphere.

Another place that was marked by UNESCO as a World Heritage Site. The reserve area is really very large, it occupies more than 130,000 (one hundred thirty) hectares. On this square there is a huge variety of representatives of rare species of flora and fauna, some of the species are listed in the Red Book.

If you start listing the entire list of the diversity of local nature, it will take quite a while. That is why it was decided to put this territory on the list of reserves in order to preserve the world heritage in its original form, for us and our descendants.

The nature of Aksu-Jabagly is very diverse, because the reserve covers a large territory of the hills of the Western Tien Shan. Altitude is between 1000 (one thousand) and 4280 (four thousand two hundred eighty) meters. Accordingly, the climate here varies depending on the altitude zone. As you walk or travel, you can see how the semi-desert terrain gives way to bright waterless meadows, and dense thickets of juniper forests come to replace the meadows.

It is impossible to describe the landscapes of the reserve in words, this is just the case when it is better to see once than hear a hundred times. Especially if you have been there during the flowering of tulips.

The lucky ones who visited the inaccessible foundation pit of the reserve probably appreciated the reserve “treasure” in the form of ancient carved animal drawings, images of hunting and life, on stones. Another “pantry” of the reserve is the petrified traces of ancient representatives of the flora and fauna of the area.

Continuing the theme of holy places and mausoleums of the South Kazakhstan Region, one cannot ignore the Domalak An mausoleum (real name Nurila Ali Sylankyzy). So the people called the youngest wife Baidibek-Ata, Biya, who fought for the unification of the Kazakh people.

Domalak Ana literally translates as “Holy Mother”, such a nickname Nurila earned due to her exceptional mind and her true wisdom, which was able to try on people with many years of resentment. The saint is considered the ancestress of the people who lived in Semirechye, Shymkent, and Tashkent.

According to legend, her husband, Baidibek-Ata, appeared in a dream in a dream, after which she decided to move to her native region of the Karatau mountains, where she left this World during prayer.

Initially, the mausoleum arose over the burial of the saint at the initiative of her grandson Dulat, who invited a master from Bukhara named Abdullah Sheri. He built a four-tiered domed mausoleum, which to this day is a holy place (an architectural monument dates back to the XI (eleventh) century). After that, the mausoleum was restored more than once, and acquired its current form in 1996, which was created using masonry made of white stones brought from Mangystau. According to legend, there are two stones in the mausoleum, between which only a pious person can pass.

And this is not all the places that can be visited during a tour of the South Kazakhstan region. We talked only about a small part of interesting and beautiful places, but there is still a gorge along which the Bourguluk river, Sairam-su and Kazylkol lakes, Sairam-Ugam State National Park, the Aksu river canyon, Syrdarya river and Shardara reservoir, Tugay forests, Sands of Kyzylkum and the ruins of the Sauran fortress.

You can visit all these places, imbue their atmosphere and hear breathtaking legends and tales from experienced guides. To do this, you need to choose a tour suitable for you to the city of Shymkent or, in general, a tour of the South Kazakhstan Region and all this in On-Line mode on our El-Tourism travel service!

Travel in two clicks with the El-Tourism travel service!